The area now bounded by South Yuba River State Park was an important gold-bearing locality during the California Gold Rush in the 1850´s and again in the 1930´s during the Great Depression. The ore deposits are much younger than the Smartville Complex. They formed during the Cretaceous Period (120 to 100 million years ago) at the margins of granitic plutons during the emplacement of the Sierra Nevada Batholith, when gold bearing fluids filled rock fractures and cooled to form gold-rich veins. Weathering freed gold from the veins, and erosion then transported the gold eventually to creeks, streams and the Yuba River.

In the South Yuba River State Park area, the river emerged from the steep gorge upstream, and, as it slowed, it dropped much of its suspended load (including relatively heavy gold particles), forming so-called auriferous gravels.

Starting from the parking lot just north of the South Fork bridge and hiking East along the Buttermilk Bend trail, rocks belonging to the Smartville Complex can be examined. 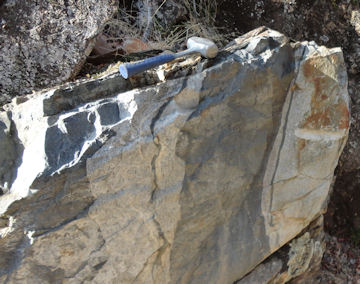 Originally, the town of Smartsville was so named (for local hotel owner James Smart) beginning with the first post office in 1865. In 1909, the US Post Office changed the name to Smartville. During the hundred-year Smartville period, the geologic investigations were completed and the Smartville Complex was described. Finally in 2008, the US Postal Service reversed the name to Smartsville in response to community opinion.