Rain began to fall in November, 1861, and the South Yuba was 26 feet above low water on December 9. David Wood´s bridge at Bridgeport (the 1851 Sparks Bridge) and his bridge at Point Defiance washed away on January 4, 1862, By the end of January 1862, most bridges on the Yuba River were carried away, and 115 inches of rain had fallen in just three months. Damage was not limited to the Yuba watershed; storms also damaged bridges in Oregon in early 1862. David Wood was left without river crossings. Fortunately he had leased and then bought a saw mill at Forest City in 1858. As soon as a new bridge design had been selected, he quickly set the mill to producing douglas fir timbers for the structural members and sugar pine shingles for the roof and siding for a new bridge. 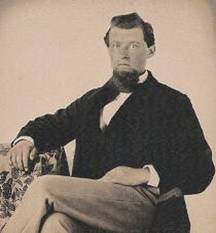 Perkins Lafayette Hutchinson was toll taker at the Sparks and Covered Bridges for David Wood and the Virginia Turnpike Company from 1856 to 1864. He is said to have had an ´elephant gun´ to discourage robbers and to have hidden gold dust and nuggets in a nearby chicken coop. He operated from Wood´s store near the Bridge. Gideon Hand Graves was toll taker for Charles Cole from 1876 through 1899. 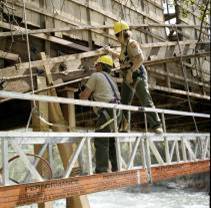 About that time Boise Cascade, then developing its Lake Wildwood property, was faced with a choice: move the deteriorating and greatly altered Anthony House from the new lake site or donate the $10,000 cost of the move to the covered bridge restoration fund. The decision was left to the Historical Society, and the Society decided in favor of the donation. The US Housing and Urban Development Department contributed $30,000, the community raised over $10,000 and Nevada County contributed the balance needed. The bridge was leveled and realigned laterally, the abutments were strengthened, the flared weather wings at both ends were removed, and the bridge was raised about four feet. Numerous struts and beams were replaced, and two cables were attached near the center on either side of the bridge. Each pair of cables is anchored to the abutments to hold the bridge in alignment. The shingles were removed and replaced. Again in December 1996 and January 1997 heavy rains raised the South Yuba to the same level as in 1862 (26 feet above low water) and within inches of the Bridge deck. Significant damage was sustained by lower structural members and the siding shingles, but the bridge was saved by its raising in 1971 and was repaired again.

Neither a truss nor an arch alone could span the 208 feet across the South Yuba River, so Wood decided on an eastern US design that combined a truss and arch into a single structure. The original ridge line was 251 feet including the weather wings at each end. Today´s bridge is 229 feet long on the ridge line and is the longest single-span covered bridge in the world. The bridge combines a Howe truss, patented in 1840, and a Burr arch, the basis of many bridges built in Chester County, Pennsylvania around 1850. Timber bridges often are covered to protect the wood from the weather. The covered bridge was completed by about mid1862. 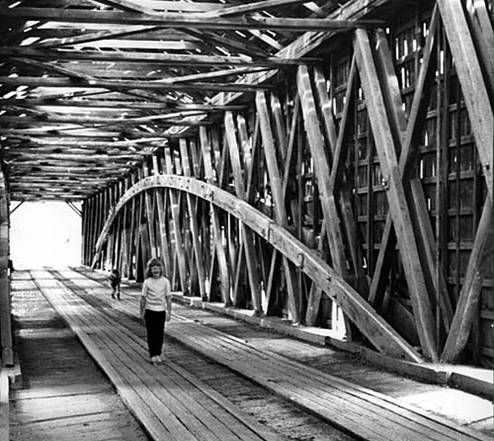 In 2011 the bridge was closed to pedestrian traffic again due to deterioration of structural members. A community-based Save Our Bridge campaign successfully fought for the state funds to stabilize and repair the bridge. Stabilization was completed in early 2015.