Soon after construction of the 1850 bridges across the South and Main Yuba River branches, near their confluence, and the 1851 Sparks Bridge across the South Yuba, this district has been known as Bridgeport. A large part of the history of South Yuba River State Park is concentrated at Bridgeport. This history is summarized here, and described in detail in the Cultural History page.

Southern Maidu Nisenan tribes lived along the South Yuba and Deer Creek Rivers long before the 49ers came to seek their golden fortune. The Nisenan people lived close to nature, hunting animals for food and clothing, harvesting salmon from the river, and using native plants for nutrition, medicine, musical instruments, and textiles. Important villages near Bridgeport were at Bridgeport, near Rice's Crossing, and on Deer Creek at Anthony House (now beneath Lake Wildwood waters).

As the pivotal event in California State history, the Gold Rush forever changed the landscape and population of California. Five months after Marshall's initial discovery in Coloma in January of 1848, gold was discovered by Jonas Spect at Rose's Bar, about 15 miles downstream from Bridgeport on the main Yuba River. Early fortune seekers used gold pans, sluices and dredges (placer mining). As the surface gold became harder to find, organized mining companies began hydraulic mining (Malakoff Diggins State Historic Park) and hard rock mining (Empire Mine State Historic Park). Amateur gold panners can still find a bit of gold along the river. Remnants of historic ditches which were built to control the flow of water are still evident along the walls of the South Yuba River canyon.

In the 1860´s this bridge was constantly a bustle day and night, with passenger and commercial traffic beating a path to the silver mines of Virginia City via the Henness Pass. Today at 229 feet, David Wood´s bridge is the longest single-span wooden covered bridge still in existence in the United States.. 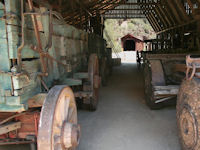 Our collection of 11 authentic wagons and a hay press, housed in the historic horse barn, tell the story of transportation in the Gold Rush era and beyond. Come see heavy duty log and freight wagons (the "big rigs" of their day), utilitarian farm and stage wagons, passenger buggies, and more. The barn stored hay for early-day teams on their way to French Corral, North San Juan and eastward.

After the initial gold rush, silver was discovered in the Comstock Lode in Nevada. The Virginia Turnpike was a crucial link between the port in Marysville and the Henness Pass, which was passable more months per year due to its relatively low altitude. Portions of the Turnpike and Henness Pass road are still navigable today. Hay stored in the Barn fed the teams on their way to Nevada.

The Cole and Kneebone Families

Early pioneers, the Coles and Kneebones, lived at Bridgeport from the 1850´s through the 1940´s. Through the years they ran a farm and ranch, built the stone walls still standing at Bridgeport, operated the barn to provide hay and rest for hardworking horses, worked as teamsters, and ran a swimming resort and gas station.